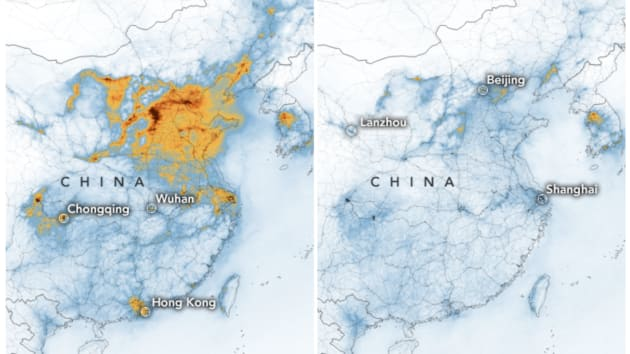 Canal water in Venice has cleared up without boat traffic. Air pollution in China has plunged amid unprecedented lockdowns. In Thailand and Japan, mobs of monkeys and deer are roaming streets now devoid of tourists.

The coronavirus pandemic is shutting down countries across the world, causing a significant decline in air pollution in major cities as countries implement stricter quarantines and travel restrictions.

But the pandemic’s unintended climate impact offers a glimpse into how countries and corporations are equipped to handle the slower-moving but destructive climate change crisis. So far, researchers warn that the world is ill-prepared.

For years, scientists have urged world leaders to combat planet-warming emissions, which have only continued to soar upward.

“In the midst of this rapidly moving global pandemic, it’s natural that we also think about that other massive threat facing us — global climate change — and what we might learn now to help us prepare for tomorrow,” said Peter Gleick, a climate scientist and founder of the Pacific Institute in Berkeley, California.

“The pandemic is fast, shining a spotlight on our ability or inability to respond to urgent threats. But like pandemics, climate change can be planned for in advance, if politicians pay attention to the warnings of scientists who are sounding the alarm,” Gleick said.

The virus has infected more than 311,000 people globally and killed at least 13,407. Countries like China and Italy have closed their borders and locked down cities, while the U.S. has closed its northern border with Canada and banned entry of foreign nationals from a slew of affected countries.

Satellite images from NASA’s Earth Observatory show significant drops in pollution across China and Italy since the start of the outbreak, as travel restrictions in those countries halt air, train and road traffic.

Italy, which has become a center of the outbreak outside of China, has undergone some visual environmental changes without tourism. Venice’s typically murky waterways have turned clear since the sediment remains on the ground without boat traffic. The water quality in the canals is not necessarily changed, but the air quality has improved.

“As for the environmental benefits we see from the slowdown of day-to-day life and economic activity in terms of improving air quality and other slight benefits, it’s a good sign that our ecosystems are somewhat resilient if we don’t completely destroy them,” Gleick said.

“But it would be nice if we could improve our environment without having to cripple our economy,” he added.

Scientists argue that the long-term impact of the coronavirus pandemic on climate change will depend on how countries and corporations respond to an economic crisis.

The International Energy Agency, or IEA, has warned the virus will weaken global investments in clean energy and industry efforts to reduce emissions, and has called on governments to offer stimulus packages that consider climate change.

But an economic stimulus package that considers global warming will likely not be the response from many countries.

For example, the Prime Minister of the Czech Republic recently urged the European Union to abandon its landmark green law focusing on carbon neutrality as it grapples with the virus outbreak. The Czech Republic depends largely on nuclear energy and coal.

Furthermore, major U.S. airlines are asking for billions of dollars in government aid as they face potential bankruptcy from travel decline, which President Donald Trump has endorsed. Air travel is expected to bounce back after the pandemic subsides, and the industry’s emissions are expected to triple by 2050.

Climate researchers warn that the virus will hinder climate change action from corporations and countries in the long-run.

Rob Jackson, a professor of Earth system science at Stanford University and chair of the Global Carbon Project, said companies that are hurting financially will likely delay or cancel climate-friendly projects that require investment up front.

Sarah Myhre, a climate scientist and environmental justice activist, said that the way in which the world recovers from the pandemic is vital in the fight against climate change.

“If the actions here continue to bail out fossil fuel companies and multinational corporations and banks, and invest in fossil fuel infrastructure, then we are digging a hole deeper into a more violent and dangerous place,” Myhre said.

“I think that there’s potential for this pandemic to become a moment of mass awaking of our ability to have compassion for each other,” she added.

This story originally appeared on CNBC's website and can be viewed here.