Posted on January 7, 2020 by Robinson Meyer, The Atlantic 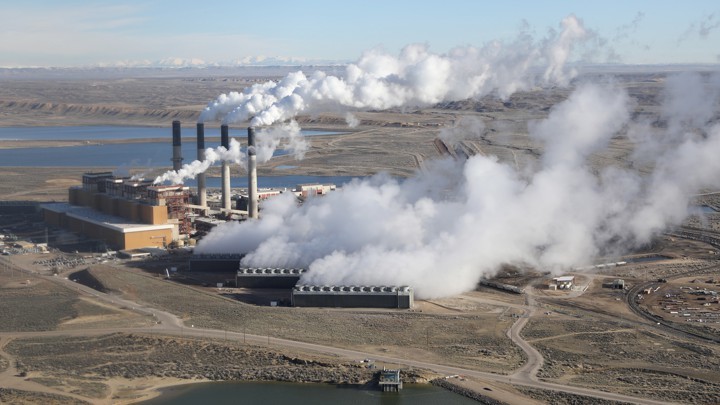 Even though President Trump has tried to prop up coal-burning plants like this one outside Rock Springs, Wyoming, the coal industry had its worst year ever in 2019. Jim Urquhart/Reuters

Here’s the good news, such as it is, for the climate: American coal consumption plunged last year, reaching its lowest level since 1975, as electrical utilities switched to cheaper natural gas and renewables. Over the past decade and a half, coal’s collapse has saved tens of thousands of lives nationwide, according to new research, and cut national greenhouse-gas emissions by more than 10 percent.

The bad news is almost everything else. Outside of the power sector, the country’s planet-warming pollution continued to grow last year. Almost three decades after climate change first became a political issue, the American economy remains a continent-size machine that guzzles fossil fuels and excretes money.

Those are the major takeaways from an estimate of the United States’ 2019 greenhouse-gas emissions, published today by the Rhodium Group, a private energy-research firm. Last year, American greenhouse-gas pollution fell by 2.1 percent, driven almost entirely by coal’s decline and a plodding economy. While that overall decrease is nominally good—especially compared with 2018, when American emissions actually increased overall—it is not happening fast enough.

“We see nothing currently planned at the federal or the state level that is going to put the U.S. on track for the Paris Agreement target,” Trevor Houser, an author of the report and a partner at the Rhodium Group, told me. “It is still possible to reduce emissions fast enough to meet that target, but it would require a rapid and ambitious change in federal climate policy.”

The United States is the world’s second-biggest emitter of carbon dioxide and other greenhouse gases, which cause both ocean acidification and global warming. While the United States is responsible for about 14 percent of the world’s annual greenhouse-gas emissions today, it is the largest all-time source of cumulative carbon-dioxide pollution. And because it is the world’s largest consumer market, its energy system and federal policies play an outsize role in helping new technologies achieve mass scale and low cost.

The new report tells two different stories about emissions last year. The first—and far more upbeat—is that coal consumption is cratering. American coal use fell 18 percent, pulling down the power sector’s overall emissions by almost 10 percent. It was the largest one-year drop in coal consumption in history. “Coal ended the decade at less than half the level that it started the decade, which is remarkable,” Houser said.

As coal declined, the health of ordinary Americans improved. From 2005 to 2016, coal-plant shutdowns led to such significant air-quality improvements that they saved the lives of about 26,000 Americans, according to a separate study published this week in Nature Sustainability. (Data are not yet available to extrapolate those results to 2019.)

Jennifer Burney, the author of that study and an environmental scientist at UC San Diego, told me that whenever a coal plant closes, the statistical likelihood of death by any cause falls by “just shy of 1 percent” in any county within 15 miles. Infants and senior citizens see the greatest declines in mortality. Some of the worst toxic pollutants disappear from the air within days of a plant closure, she said. But carbon dioxide is, alas, not among them: It can linger in the atmosphere for hundreds of years, capturing heat and intensifying global warming all the while.

The switch from coal to natural gas has not been wholly good for American emissions. As utilities have adopted natural gas, they have created a vast and exceptionally leaky apparatus for moving it around the country. Some critics argue that this infrastructure is as bad for the climate as the coal system that it is replacing, because, in the shorter term, methane captures more heat in the atmosphere than carbon dioxide.

While there was a “meaningful increase in oil and gas methane emissions last year,” it was “not enough to offset the decline in coal generation entirely,” Houser said. About a third of the greenhouse-gas reductions from coal’s decline have been eaten by methane leaks and by outright pollution from burning natural gas, he said. 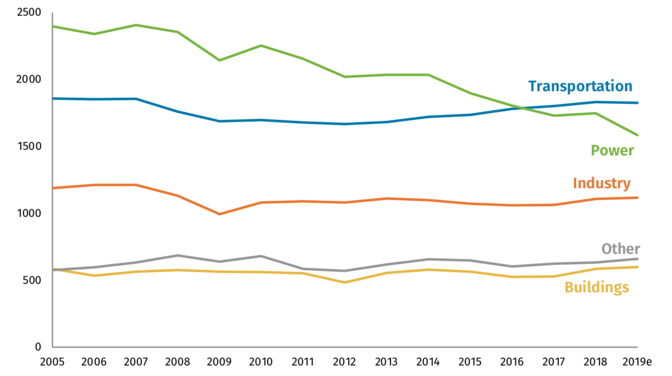 The second story line from the Rhodium report is more pessimistic. Ultimately, the electricity sector generates only about 27 percent of national climate pollution. The remaining 73 percent of national emissions are produced by the rest of the economy, and these have barely budged. Almost nothing is being done about greenhouse gases from HVAC systems, 18-wheelers, or livestock, for instance.

The only bright spot anywhere else in the economy, he noted, came from passenger vehicles. Americans drove more last year than they did in 2018, but carbon emissions from cars and light trucks stayed fairly flat. That’s likely due to federal fuel-economy standards—which the Trump administration is now trying to freeze and weaken. While it is possible to imagine Americans eventually reducing those emissions on net by shifting to electric vehicles, such a change would require more aggressive government policy.

“Even now, the transportation sector is still 92 percent powered by petroleum products. If we want it to be decarbonized, we have to switch it,” Constantine Samaras told me. He is a professor of civil and environmental engineering at Carnegie Mellon University, and he was not involved in the new report.

Preparing the whole economy for decarbonization will take aggressive federal policy, he said. Almost no research has been done on producing low-carbon steel or other industrial products. Even adopting electric cars en masse will be difficult, Samaras said: “The switchover in the fleet of cars takes a lot of time. It takes money. Cars are the second most expensive thing that most people own, if they own a house.”

Most worrying, the new Rhodium estimate shows that, outside the power sector, year-to-year greenhouse-gas emissions are still tightly coupled to the health of the overall American economy. Last year was a weaker year for the American economy, so emissions grew more slowly. “We can’t rely on that for decarbonization,” Samaras said.

The power sector could be a good platform to decarbonize the rest of the economy. In theory, if America had a low-carbon electricity system, then every other sector could be decarbonized by electrifying it. “But it is very unlikely that we’re going to electrify buildings and industry and large swaths of the transportation sector without fairly concerted policy at the federal and state level,” Houser said.

“For 20 years, everyone’s said, ‘Hey, for optimal climate policy, we should decarbonize electricity first because it’s cheapest to do it,’” Samaras said. But now “it’s 2020, and we’re going into decarbonization with the technology we have.”

Under the Paris Agreement on climate change, the United States pledged, by 2025, to cut its emissions 26 percent below their all-time high. Although President Donald Trump ordered that the country leave the Paris Agreement outright in November, the target is still held out as a baseline to gauge American climate action. Right now, making that target would require rapid cuts, including a decline of about 3 percent in average annual carbon pollution. “This is significantly faster than the 0.9 percent average annual reduction achieved since 2005,” the report concludes. “It’s still possible, but will require a significant change in federal policy—and pretty soon.”

This article originally appeared on The Atlantic's website and can be viewed here.