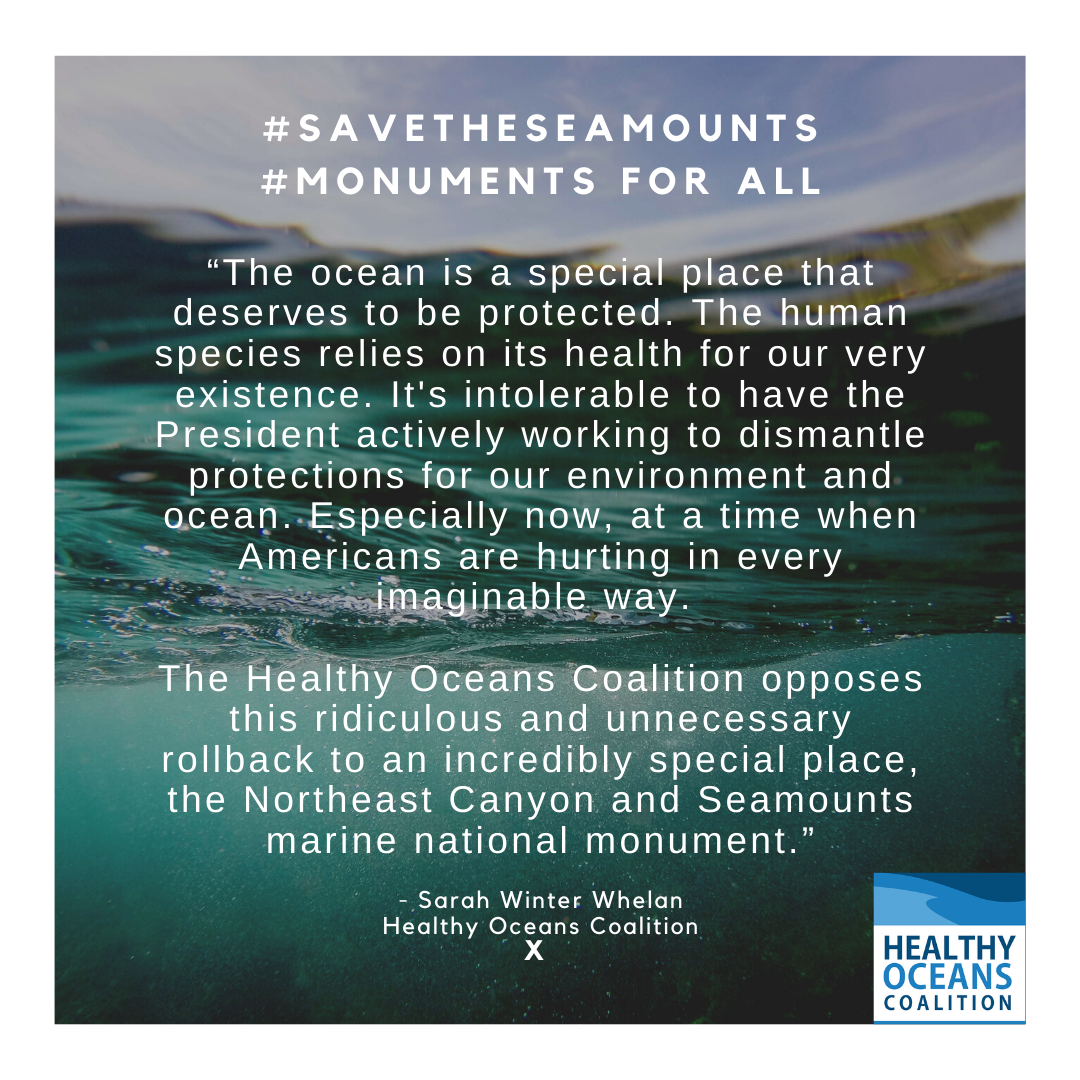 Today, the President destroyed protections for the Northeast Canyons and Seamounts Marine National Monument in New England by reopening it to commercial fishing. The Healthy Oceans Coalition is angered and frustrated at President Trump playing political theater with our ocean as our nation stands in crisis. More than 100,000 people around the country have died from a virus that is not contained. More than 40 million people are unemployed, with many waiting for economic assistance. At the same time, we are in the midst of a national crisis driven by police brutality and systemic racism in America.

And of course, today is World Environment Day.

Instead of focusing on the critical issues gripping our nation, the President is using this crisis to continue his assault on our communities and environment for the benefit of big business and polluters. Yesterday, he took steps to undermine the National Environmental Policy Act, the law that gives minority, coastal, and rural communities the ability to speak out against the projects that will harm them.

Today, the President is mounting another assault against our ocean and the communities that care about it by rolling back the protections granted to the Northeast Canyons and Seamounts—a true national treasure.

Today’s move sets up a false choice about America’s fishing industry and sets a new precedent to rollback management of national monuments to allow industrial commercial extraction. Let us be clear, opening fishing in our marine national monuments will NOT lessen the burden on fishermen. The problem is a lack of a market, NOT a lack of product that can only be found within the monument.

Read our words below:

“The ocean is a special place that deserves to be protected. The human species relies on its health for our very existence. It is intolerable to have a president actively working to dismantle protections for our environment and ocean. Especially now, at a time when Americans are hurting in every imaginable way. The Healthy Oceans Coalition opposes this ridiculous and unnecessary rollback to an incredibly special place, the Northeast Canyons and Seamounts Marine National Monument.”

"Exocetus Autonomous Systems stands in vigilant support of the Northeast Canyons and Seamounts Marine National Monument in New England as well as all the other Pacific marine national monuments. These monuments are critical to the health and sustainability of our nation’s waterways. Rolling back any protections for these vital areas is reckless and further undermines the environmental progress that our country has made and the American support these areas have. Mr. President your focus and energy should be on Covid-19, the economic recovery of the US and healing the racial divide that your words, actions and policies have caused."

“I have faith in the idea that oceans are part of a public trust. I believe no one owns these waters, and that all must share in their wise use. I believe we must empower our governments to be wise stewards of the oceans, and that we must hold accountable all governments and individuals for their ocean policies.”

“In the midst of a global pandemic and the United States confronting its history of police brutality and systemic racism—not to mention it’s also World Environment Day—this rollback of the Northeast Canyons and Seamounts Marine National Monument is reversing hard-won progress to protect our ocean. 86% of Americans support protecting 30% of the ocean by 2030 and 95% of Americans support establishing marine protected areas to safeguard ocean wildlife and habitats. We strongly denounce this move and will continue to fight for strong ocean protections."

"Today, President Trump signed an Executive Order allowing commercial fishing in the Northeast Canyons and Seamounts Marine National Monument. This monument, much like our national parks, was created as a lasting legacy for current and future generations of Americans. This is part of a pattern of eliminating environmental protections while the Nation's attention is elsewhere. President Trump's actions harm our ocean, and our children's national and natural heritage. While he is reducing protected areas to placate a special interest, this is in direct contrast to the support for expanding protected areas as expressed by a full 99% of aquarium visitors in a recent survey. Protecting our ocean is important to Americans, no matter where they live."

“America’s Marine National Monuments are an important part of keeping our oceans healthy and productive for future generations. The White House is now apparently running out of new ways to do harm to our nation’s protected lands, but that’s no excuse for the President to instead irretrievably vandalize protections for the most fragile parts of our marine environment.”

Amid two national crises, a global pandemic and a racial justice movement, we are astounded and deeply disappointed in the decision to rollback protections of a critically important marine sanctuary. Scientists around the world agree: one of the best things we can do for the health of our oceans is set aside highly protected areas that allow populations and species to rebound and recover, providing buffers to other stresses. We are completely dependent on the health of our global ocean for survival. Without our oceans we wouldn’t have oxygen to breath, seafood to eat, pathways to travel and ship, or a blue economy to benefit from. We strongly urge the federal administration to reinstate the commercial fishing protections of the Northeast Canyons and Seamounts Marine National Monument. Our oceans and our communities depend on it.

Our oceans are Earth’s life force. As fisheries struggle and our climate falters, it is clear that science-based, well-thought-out policies should reign. Instead of establishing practices that will support our fishing industry long-term, President Trump once again turns a deaf ear and lobs yet another damaging, and needless, environmental roll-back. The Northeast Canyons & Seamounts Marine National Monument does not curtail catch allowances, nor stop fishermen from taking fish from other areas to sustain their businesses; it merely recognizes this particular pristine area of unique habitat as safe from unfettered access. Attempting to remove this protection is a foot in the door to weakening all ecosystem protections. We must close that door before it swings wide open.

Please stand up for the Northeast Canyons and Seamounts Marine National Monument by signing this petition and by contacting your members of Congress and expressing your opposition to the rollbacks.