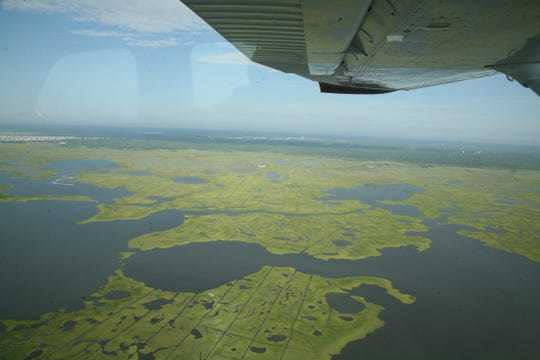 The Trump administration recently proposed changes to the National Environmental Policy Act (NEPA) under the guise of streamlining federal infrastructure projects. In reality, this proposal could make it easier for projects harmful to our ocean — like offshore drilling and seismic blasting — to be approved with little review for minimizing impacts to ocean habitat and marine wildlife.

Not only that, but the new rules could allow dirty fossil fuel projects, such as pipelines and coal-fired power plants, to proceed because new environmental reviews could minimize and put off whether the project would contribute to climate change.

This sham effort to “expedite” environmental review of proposed federal projects is really just a way to ignore science, rubber stamp projects that will damage our ocean, and further fuel our rapidly warming climate. With New Jersey’s seas rising twice as fast as global mean sea level, New Jersey does not have the luxury to sit back and watch the Trump administration dismantle crucial environmental safeguards like NEPA.

Not only does NEPA require robust environmental review of proposed federal projects, but it also invites and encourages the public’s voice. Yet this proposal would minimize the opportunities for the public to express its concerns during the reviews of proposed projects.

New Jerseyans have a strong voice and right now we have the chance to use it. The White House is taking public comments on its proposed NEPA rules until March 10. We cannot give up our fight for clean air, clean water and a healthy ocean. It is too important.

This is an ambitious step by New Jersey, which can hopefully set the pace for other states. However, it will not be enough to save our 130 miles of shoreline from rising tides if the federal government can approve federal projects that will worsen climate change impacts.

At the American Littoral Society, a New Jersey-based non-profit that has championed ocean conservation and resiliency since 1961, we see the real consequences of climate change every day and build resiliency into every action we take to protect New Jersey’s ocean and coast; whether it be racing to restore beaches devastated by superstorm Sandy in time for horseshoe crabs and threatened red knots or building oyster reefs to combat increased erosion from sea level rise.

The toll that climate change is taking on the ocean is undeniable. Manmade emissions of carbon dioxide are making our waters warmer and more acidic and starving them of oxygen. Last year, the ocean was the hottest it has ever been, causing great harm to fish and marine wildlife. An estimated $60 billion worth of New Jersey homes and buildings now face an increased risk of flooding from hurricanes, which are fueled by warming waters.

No matter where we live in the United States, the ocean is integral to our day-to-day lives, supplying our food and oxygen, supporting our coastal economies, and regulating our weather and climate. Climate change puts all of that at risk. While our elected officials in Congress like Congressman Andy Kim work to take action on ocean climate issues, this is a chance for us to act. If the administration’s proposed changes to NEPA are allowed to go forward, it will be a devastating step in the wrong direction for our ocean and our planet.

This OpEd appeared on app. and can be viewed here.