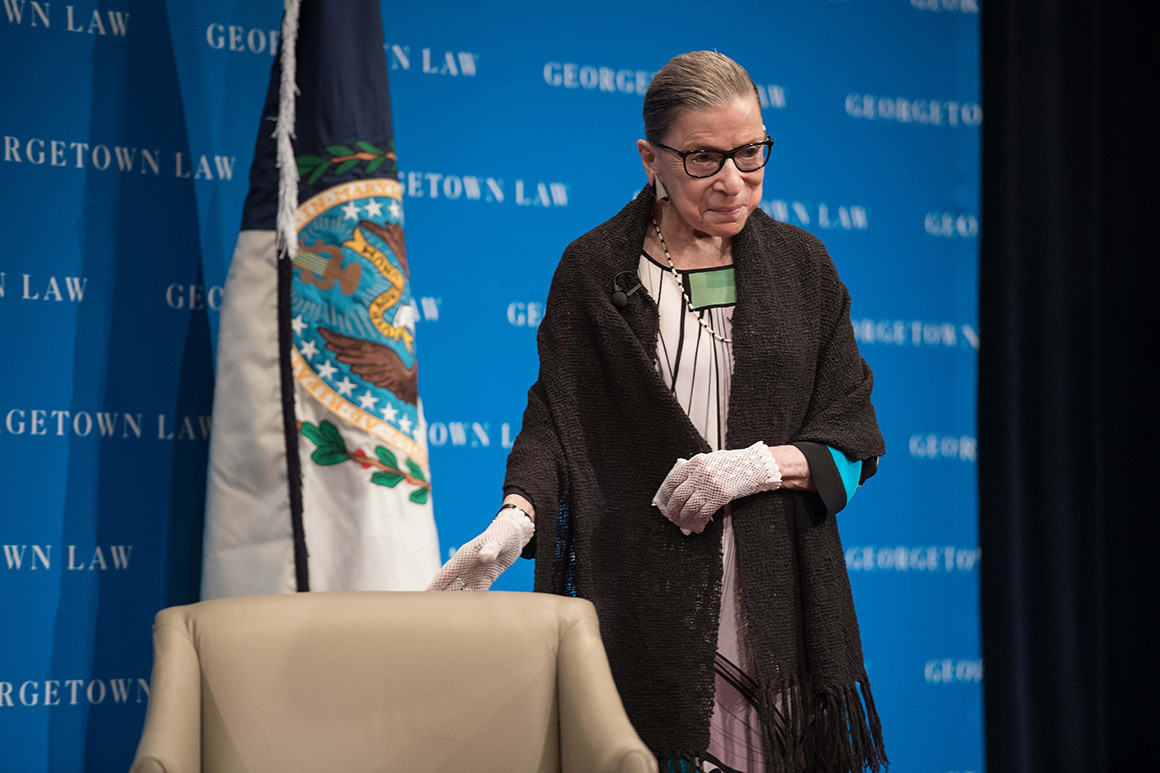 The landmark ruling she joined in 2007 that affirmed EPA’s power set up the Obama administration to issue rules limiting carbon pollution from cars, power plants and other sources — and set up a contentious legal battle over the extent of federal authority still being waged today.

Though the core of her legacy centered on women’s rights and gender equality, Ginsburg was also a reliable vote over the decades in favor of environmental protections, and activists mourned her loss late Friday.

“Through her expansive mind, sound temperament and unwavering judicial integrity, she plied the Constitution as a living instrument of American life, lending it meaning in the life of us all,” said Gina McCarthy, president of the Natural Resources Defense Council and former EPA administrator.

"Our communities are safer, healthier and more free because of RBG," said League of Conservation Voters President Gene Karpinski.

Ginsburg was clearly aware of the threats posed by climate change. At an event in December, she cited Swedish teen climate activist Greta Thunberg as one of the future leaders giving her hope, according to Vanity Fair.

“The young people that I see are fired up, and they want our country to be what it should be,” she said. “One of the things that makes me an optimist are the young people.”

Ginsburg was part of the five-justice majority in the high court's first-ever ruling on climate change, 2007’s Massachusetts v. EPA, that said the Clean Air Act gave EPA the authority — and, effectively, a mandate — to regulate greenhouse gases from automobile tailpipes.

That ruling led directly to the Obama administration in 2009 beginning to regulate carbon dioxide emitted from cars and trucks for the first time at the federal level.

Then in 2011, Ginsburg authored another ruling, American Electric Power v. Connecticut, that reiterated EPA’s authority to target greenhouse gases — this time for a unanimous court.

But environmentalists and Democrats saw a bright silver lining — confirmation that the federal government can and should be acting on climate change already.

The Obama administration subsequently moved to issue rules for power plants, at the time the nation’s top source of greenhouse gases, after Congress failed to pass a cap-and-trade bill.

The regulatory and legal fighting over those power plant rules and their Trump administration replacements has meant power plants have not yet actually been subject to carbon dioxide regulation. But the specter of federal rules — along with market pressure from cheap natural gas and renewables — helped cause a huge shift in the nation's electricity mix: The U.S. is projected to generate just 20 percent of its electricity from coal this year, compared with almost half when the court ruled.

More than a dozen cities, counties and states in recent months have sued fossil fuel companies in state courts in a wave of lawsuits intended to make the corporations pay for climate change-related harms such as extreme weather and sea level rise. The companies have tried to move those cases out of the states and into federal courts — where they probably would be blocked as Connecticut’s suit was in 2011. But three appellate courts that have weighed in on the jurisdictional question have sent the cases back to the state courts, which could open the companies up to untold liability.

When the Supreme Court returns for its fall term in a few weeks, the eight remaining justices are slated to decide whether to wade into the jurisdictional fight in these climate change suits. If the justices allow them to continue in state courts, a fresh wave of litigation could soon hit greenhouse gas emitters.

While Ginsburg was a key voice in defining the Supreme Court’s short history on climate law, she also has a long record of voting for other types of environmental protection.

In 2001, she joined a unanimous court in ruling that EPA cannot consider implementation costs when deciding on national air quality limits for smog, soot and other major pollutants. It is considered one of the high court’s most important environmental rulings, and those EPA regulations are credited with saving and improving millions of lives.

Six years ago, Ginsburg led a 6-2 majority that reversed a lower court and upheld an Obama rule limiting air pollution that floats across state lines, saving a regulation credited with helping shut down some of the nation's dirtiest power plants.

And in April, she was part of a six-justice majority that said pollution that travels into waterways via groundwater can be subject to the Clean Water Act. While the high court's new standard was narrower than environmentalists had hoped, it nonetheless opens up companies to new potential liabilities.

Indeed, Ginsburg was a consistent vote in favor of broad Clean Water Act jurisdiction as questions about the reach of the 1972 law became a legal quagmire over the past two decades. Those questions are widely expected to reach the high court again in the coming years.

She joined with the court’s liberals in the dissent in Solid Waste Agency of Northern Cook County v. United States in 2001, in which the majority ruled that isolated ponds and wetlands are out of federal reach. In the 2006 case Rapanos v. United States, which resulted in a splintered 4-1-4 decision, Ginsburg joined an opinion by then-justice John Paul Stevens that argued for sweeping federal jurisdiction over virtually any water feature.

The Trump administration earlier this year finalized a regulation enshrining a narrow definition of federally protected waterways that legal experts say is on questionable ground, given that it is primarily based on then-Justice Antonin Scalia’s plurality opinion in the 2006 case, which garnered the backing of only four of the justices. Challenges to the Trump administration’s rule have been filed by Democratic attorneys general, environmental groups and property rights activists and are in their early stages in district courts across the country.

Annie Snider contributed to this report.

This article originally appeared on Politico's website and can be viewed here.