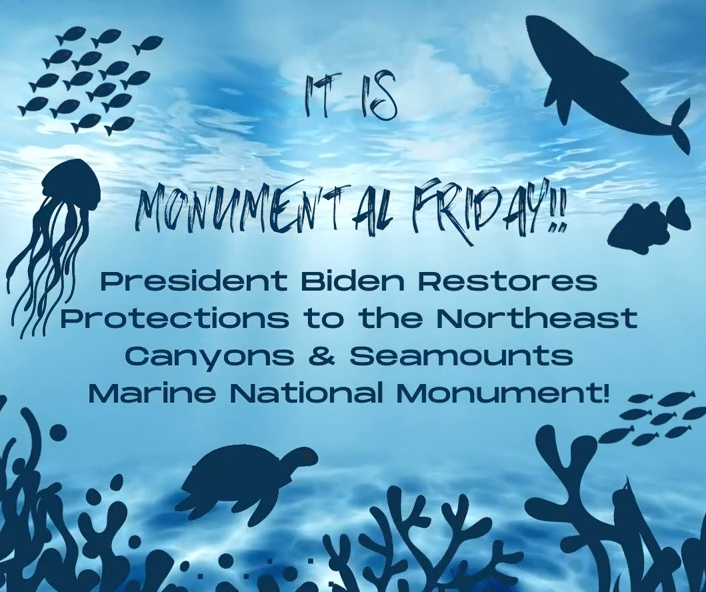 The Healthy Ocean Coalition applauds President Biden’s decision to restore protections to Bears Ears and Grand Staircase-Escalante National Monuments and the Northeast Canyons and Seamounts Marine National Monument today. By moving to restore monument protections, President Biden has acted to preserve the integrity of the Antiquities Act, one of our nation’s most important conservation laws.

The president’s actions fulfill a promise to safeguard our country’s most cherished and irreplaceable places and heed the calls of millions of Americans that spoke up alongside Tribes, scientists, and business owners in support of protecting our national monuments.

Today’s actions—alongside future monument protections—are essential to tackling the climate and biodiversity crises. In fact, increasing protections for nature is critical to buffer us against the worst impacts of these twin emergencies.

Our country needs bold conservation leadership, for the sake of our future and for the planet itself.

We are pleased to share the following soundbites from the conservation leadership in the Healthy Ocean Coalition community:

Today is a day for celebration. Today is a day for gratitude. Gratitude for the hard work of every single person that refused to give up after Donald Trump inflicted a major blow by issuing illegal rollbacks to these monuments - and gratitude for the Biden Administration for listening, partnering, and following through on their promise to restore protections for them. This decision was years in the making and, yes, there is still a lot of work to do to safeguard irreplaceable places but today, we celebrate.

Our marine monuments are national treasures that protect unique and significant natural resources on behalf of all Americans. They have been designated and expanded by both Republican and Democratic Presidents who recognized the need to conserve special places in the ocean important to our national heritage, similar to how we have protected these areas on land. The nation’s marine monuments cover some of the most diverse and productive ecosystems on Earth, including coral reefs teeming with life, dramatic deep-sea canyons, and towering seamounts. They are places of pride as distinctive as the forests, canyons, freshwater, and other unique terrestrial ecosystems protected in our National Parks. Choosing to protect such places is a sign of U.S. strength and leadership.

On his first day in office, Biden kicked off his presidency with a flurry of executive orders and promises – making a commitment to listen to science and protect our lands and ocean. Now, he’s carrying these promises through. Biden signed a proclamation to fully restore the original protections to our marine national monument. Protecting places like the Northeast Canyons and Seamounts – and land-based national monuments like Bear Ears and Grand Staircase Escalante – can help us build a path that honors a generations-old legacy of looking after the most special natural areas of our nation.