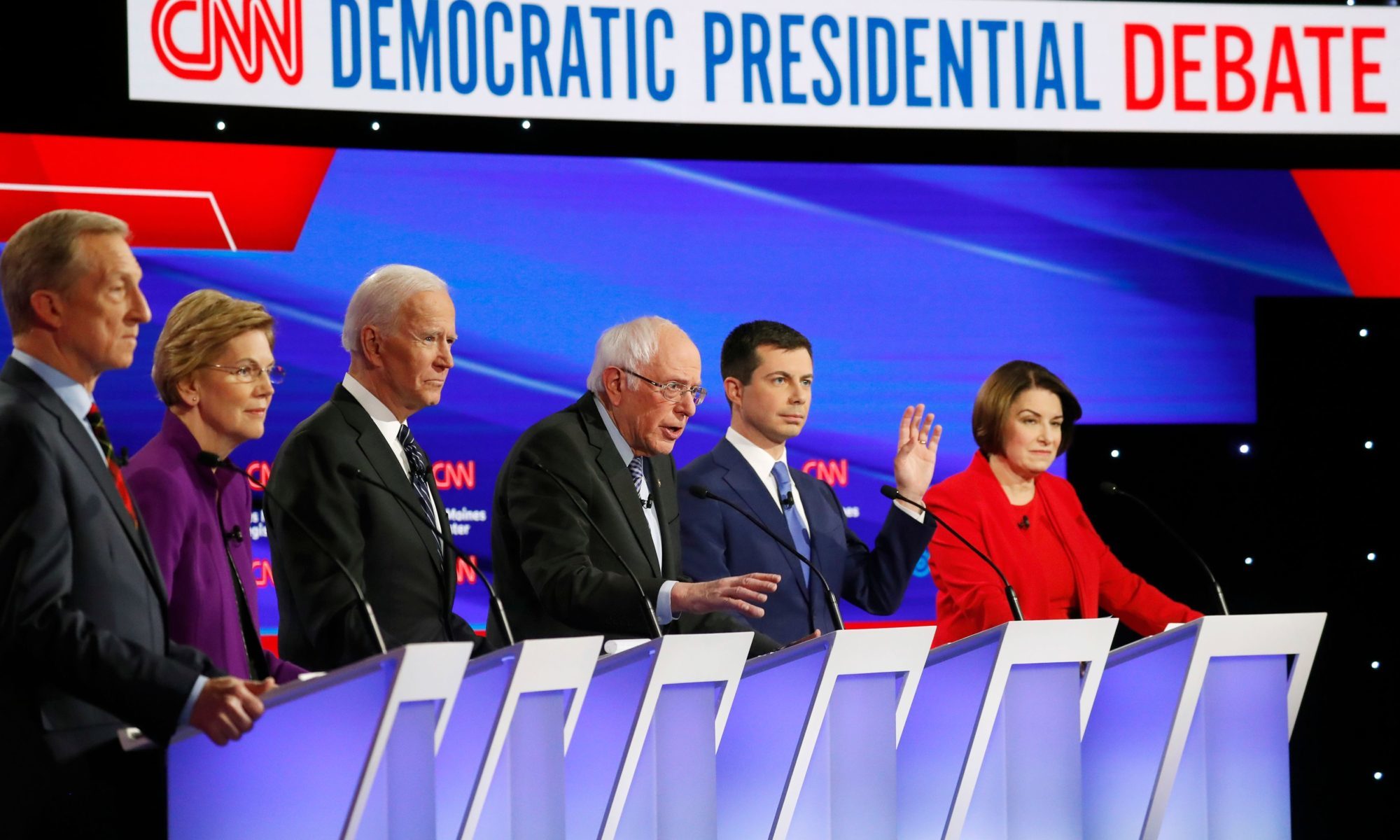 So we finally got a primary debate where there was a somewhat robust conversation about climate change! One of the most important moments of the debate was when Senator Bernie Sanders was asked to stay on the topic of trade and he answered that trade and climate change are one and the same–and he wouldn’t vote for a trade deal that doesn’t account for climate change.

This fueled a conversation that we shouldn’t silo climate change as an issue but rather talk about all the ways that it affects traditional kitchen table issues like, the economy, healthcare, immigration, and national security. Overall this is something that the candidates did well throughout the course of the night.

Here’s how each candidate brought up climate change throughout the night:

Elizabeth Warren: She stayed on-brand and framed climate action in the context of fighting corruption (her signature issue). Warren also stressed the need to act on climate change in order to support global stability and how she would serve as the antithesis to Trump in establishing strong environmental protections.

Bernie Sanders: He probably had the most to say about climate change throughout the night. However when he was asked how he would reconcile the fact that some unions aren’t on-board with robust climate change action, Sanders didn’t specify how he’d bridge the divide. That will be an important imperative for a progressive candidate and answer that we haven’t really heard yet.

Joe Biden: On the issue of trade, Biden stated that there would be “no trade agreement signed in my administration without environmentalists and labor at the table.” He reiterated that climate change must be a central component of our foreign and trade policies–which is spot on and probably one of the reasons people like Biden, that he’ll restore stability with our allies.

Pete Buttigieg: The mayor was asked an interesting question, in his home of the Midwest, how would he approach those farms that cannot be saved from floods and climate change? Buttigieg answered that federal funds would have to be used to help those Americans victimized by climate change, especially black and brown Americans (one of the only mentions of environmental justice all night).

Amy Klobuchar: The Senator was asked why she didn’t support a ban on fracking and her answer was very much in line with her moderate brand: she believes that natural gas is a bridge fuel and will be necessary for the foreseeable future (which resulted in a notable scoff from Sanders). She also stressed that climate policies like a carbon tax would need public buy-in–people would need to be made whole by such initiatives in order for them to succeed.

Tom Steyer: Although he wasn’t correct in saying that he’s the only candidate calling for making climate change a national emergency (Sanders is as well), we’ll give Steyer credit for holding this view as it’s an important one. He also reiterated that he would be willing to make climate change his #1 issue–moderators should have followed up to ask if Steyer would be willing to expend all of his finite political capital on getting a climate law signed in his first 100 days.

The Conclusion: It was noticeable how much more robust answers to climate questions were in a smaller debate setting. There finally seemed to be an actual dialogue occurring over the fine points of each candidate’s plan–rather than the free-for-all it’s been in previous debates.

However one important question that was missing was how we start to curb our addiction to fossil fuels. Joe Biden elaborated on the need to build new bridges and highways but that only encourages individual car ownership. In the next debate candidates should be asked about transportation and about the cost of doing nothing. We didn’t hear a lot about what Donald Trump’s vision for the future means for our planet and quality of life, and this is an important distinction to make for American voters.

Go Deeper: Take a look at Third Way’s tracker to see where each candidate stands on energy issues.

This article originally appeared on Our Daily Planet's website and can be viewed here.